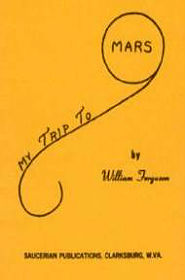 A self-professed “Adept at the art of relaxation,” William Ferguson (who, when he wasn’t relaxing, worked a day job as a postman) used the term “absolute relaxation” to describe his astral projection (or out-of-body) experiences, which included etheric voyages to the sixth and seventh dimensions. 1 (And here I thought there were only four.)

In 1938, Ferguson relaxed his way to Mars where he met Khauga who just so happened to be the Chief Uniphysicist of the Solar System. 2 According to Ferguson, he was the very first Earthman to visit Mars and because of this there was “great rejoicing” among his new-found Martian friends.

While hanging with Khauga, Ferguson was treated to a tour of the red planet, which he soon discovered was a virtual paradise. As Khauga related to him:

“How do you like our city, or living spaces, as we call them? They form a great network all over the planet, your astronomers call them canals. For two thousand years we have lived in these enclosed living spaces. We have our cities and countrysides all enclosed, and maintain a constant temperature of 76 degrees. Our vegetation grows continuously. We have made our own weather. The enclosures are tremendous electro-magnetic force fields created by our Uniphysicists.

“In our expedition to the Earth, we intend to release large quantities of expanded elements on the surface of your planet, which will, in turn, speed up the expansion of the elements you are working with. We have waited for this time in the Earth’s development to step in and help our sister Planet Earth. If your scientists will listen to the truth, and stop pursuing selfish interests, and obeying the dictates of the combines, they can have an oasis in the deserts and an abundance of every usable thing man can imagine….”

Inspired by his amazing Martian adventures, Ferguson founded the Cosmic Circle of Fellowship,

“…a religious organization of the sovereign State of Illinois, under the complete guidance of Celestial and Immortal Beings from Outer Space. The messenger of these space beings is William Ferguson of the Planet Earth, and other Priests and Priestesses, who have been and will be, elevated to the Priesthood of the Cosmic Circle of Fellowship…

“We worship only the Alpha and the Omega, who are the First Cause, (Everliving). We adore many Celestials and Immortals, who are working with us and guiding us. We invite all people of the Planet Earth to join us in fellowship and the worship of Alpha and Omega.” 3

Khauga instructed Ferguson to construct a device called the Zerret Applicator that could supposedly cure everything from gout to lumbago. This wonder device (selling for the low, low price of $50!) was made of plastic with nifty blue and white vertical stripes. When you held it in your hands, it emitted z-rays, “a force unknown to science.” (At least the part about “unknown to science” was true.) According to the Zerret Applicator instruction manual:

“When you hold the Applicator, it works on your life current, expanding the atoms of the same. As this takes place, it expands all atoms of your being. Expansion of your atoms produces what is commonly called relaxation.”

After receiving complaints about the Zerret Applicator, the FDA brought the hammer down on Ferguson, claiming he’d misbranded the Zerret Applicator as a cure-all—when it was really a cure for nothing. Ferguson was sentenced to two years in prison for medical fraud and the FDA even went so far as to create a PSA featuring actor Raymond Massey with a stern Zerret Applicator rebuke:

“I’m Raymond Massey and I have a special message for senior citizens. Today’s doctors, drugs, and medical devices truly work medical miracles for the young and old alike, but there are some as phony as a three dollar bill, like this Zerret Applicator, for example, which has claimed to cure arthritis with Z–Rays…There are no z-rays!”

One thought on “William Ferguson, The First Man on Mars”