Lee Childers was treated to his first spaceship trip in 1955 courtesy of an extraterrestrial named Commander Marcosan. This included a stop-over on Mars—revealed to be a “dead planet”—in addition to a jaunt to the moon, which featured cities that could be raised or lowered in and out of moon craters. Commander Marcosan’s spaceship—which travelled at the astounding speed of 250,000 miles an hour!—caused Childers to become so space-sick that one of the crew members (an 8 foot tall fellow) held him out of a porthole to allow him to throw up. All in all, Childers was taken on a total of twenty-one such starship trips, which he claimed to be a space-faring record. On one such voyage, Childers rode in a spaceship that was 100 miles in diameter called TREJEDOM. 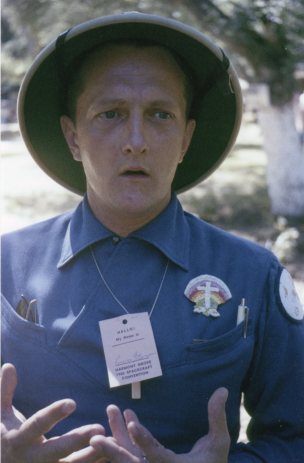 Lee Childers, otherwise known to this and other worlds as Prince NEasom. (From the Bob Beck Collection courtesy of Joe Fex, Ape-X Research)

Childers burst on to the ufological scene in a big way in December 1958 when a saucer club called the Bureau of UFO Research and Analysis (BUFORA) arranged a press conference in New York City where Childers announced to the world that—in addition to being a baker from Detroit, Michigan—he was also a 250 year old interplanetary traveler (otherwise known as Prince NEasom from the Royal Family of Planet Tythan.)

At his press conference, Childers unveiled a rejuvenation machine which had allegedly brought him back from death on three separate occasions, each after tangling with some unruly Men-In-Black who kept killing Prince NEasom on account of his efforts to alert mankind that we’re doomed for nuclear annihilation if we didn’t heed the space brother’s dire warnings. Or something like that.

Accompanying Childers were a couple of female assistants, Beth Docker and Fannie Lowrey. It was later revealed that Childers had ditched his wife and five children for the tender charms of the aforementioned Miss Docker, who in time adopted the name “Princess NEgonna.”

During the same weekend of his press conference, Childers—along with his female posse—appeared on Long John Nebel’s Party Line and before going on-air predicted that a fleet of flying saucers would show up on cue and rebroadcast the program to a worldwide audience using advanced saucer technology!

Nebel—famous for accommodating all manner of kooks—found Childers’ claims so preposterous that he kicked Prince NEasom and his crew off the airwaves  and out of the studio just a few minutes into the program, the first and only time that Long John had used the hook on a guest. Needless to say, the fleet of predicted saucers were a no-show. 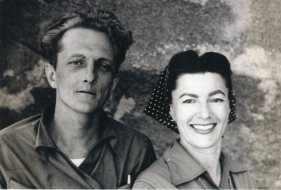 Lee Childers and Beth Docker at one of the Giant Rock Conventions during the 1960’s. (Joe Fex, Ape-X Research)

Even George Van Tassel—who hardly ever had a harsh word for his fellow contactees—denounced Childers as a fraud on the grounds that he had bad teeth, something Van Tassel considered an impossibility for someone purported to be a true interplanetary traveler.

And as an extra added bonus, here’s some astounding audio featuring Lee Childers!