Former English department head at Illinois Wesleyan University, Meade Layne left the academic world in the 1940s to pursue a career in parapsychology. In 1945, he founded Borderland Sciences Research Associates (BSRA), an “association of persons interested in ‘borderland’ facts and happenings…facts and events which orthodox or official science cannot or will not investigate.”

To this end, Layne teamed up with psychic medium Mark Probert (the “Telegnostic from San Diego”) in efforts to establish interstellar contact. Probert was among a handful of San Diegans who—while waiting to view a meteor shower on October 9th, 1946—observed the passage of a strange structure in the sky. With the craft still in view, Probert phoned Layne, who encouraged him to establish telepathic communication with this weird flying machine. 1

After the sighting, Probert told a local reporter:

“The strange machine is called the Kareeta. It is attracted at this time because the earth is emitting a column of light which makes it easier to approach. The machine is powered by people possessing a very advanced knowledge of anti-gravity forces. It has 10,000 parts, a small but very powerful motor operating by electricity, and moving the wings, and an outer structure of light balsam wood, coated with an alloy. The people are nonaggressive and have been trying to contact the earth for many years. They have very light bodies. They fear to land, but would be willing to meet a committee of scientists at an isolated spot, or on a mountain top.” 2

Probert channeled The Inner Circle, a group of ascended masters who were in contact with entities known as the Ethereans who visited Earth in Ether Ships from the fourth dimension.   The Ethereans—according to Probert—were able to “mat” and “demat” (materialize and dematerialize) as a means to enter and depart the Earth plane by lowering or raising their vibrational levels. Ether Ships, as would be expected, came from a place called Etheria which was “Along side, inside, outside of our world.” All of this is explained (more or less!) in Meade Layne’s The Ether Ship Mystery And Its Solution (1950).

Photos of little green (or silver) men have long been a fixture in ufology and, like everything else, these artifacts get dusted off and trotted out after a period of time has elapsed and run through the grinder again. One such retread that has continued to make the rounds—decade after decade—is a photo that first surfaced in the German newspaper  Neue Illustrierte on  April 1st, 1950, with the title “Der Mars-Mensch” which showed a strange looking little feller apparently from another planet—Mars, in this case. The accompanying article claimed that the Martian had been in a saucer crash that occurred in “Death Valley.”

A few days later, Neue Illustrierte copped that the Martian story was an April Fool’s prank, but that didn’t stop the photo from spreading through the UFO subculture in the years to follow. Since then the photo—sometimes referred to as “Silverman”—has appeared in numerous UFO books, often including the false narrative that it depicted an alien who had survived a saucer crash.

Saucer scholar Isaac Koi (www.isaackoi.com) compiled a timeline of the Silverman photo and the publications in which it appeared. The first book to feature this freaky photo was Major Donald Keyhoe’s Flying Saucers from Outer Space (1953). Keyhoe described it as “two men in trench coats, each holding an arm of a queer, shiny figure about three feet high.  Two girls standing nearby seemed to be awestruck by the little man…Eyewitness G-Man McKennerich, from Phoenix, reports “I was astounded by the importance of this great moment.  For the first time I was seeing a being from another world.  At the same time I was equally amazed by the desperation of this Aluminum Man. His body was covered with a shiny metal foil.  The observatory in Phoenix presumes this is for protection from cosmic rays…”

Conflicting narratives surround the Silverman photo, some of which identified the trench-coated gents as U.S. government agents (G-Men), while other accounts described them as German scientists, and that “Silverman” was not necessarily silver-skinned, but outfitted in some sort of aluminum spaceman suit.

In Space-Craft from Beyond Three Dimensions (1959), W. Gordon Allen referenced that the creature in the Silverman photo had crawled out of a crashed saucer:

A “saucer crewman” very much like the moon man (or spirit) described by Swedenborg in his writings about the inhabitants of different planets of the solar system…This photograph is from Germany (note trench coats and North European types), but the “saucer crewman” is from a UFO that crashed near Mexico City; the corpses were sent to Germany for study…

In 1967, a concerned citizen sent a copy of the Silverman photo to FBI headquarters in D.C. inquiring if the trench-coated men were FBI agents, to which J. Edgar Hoover responded: “I can assure you the photograph you mentioned does not represent employees of this Bureau.”

Most recently, Harold Povenmire in UFO’s and Alien Abduction Phenomena: A Scientific Analysis (2016) published a colorized version of the Silverman photo as the real deal, although what “scientific analysis” he conducted is unclear. Thanks to Povenmire, this new iteration of the Silverman photo soon began worming its way through social media, as a new generation of believers clicked and shared to their heart’s content.

In 1963, Wes Bateman—a self-described “Telepath for the Confederation of Worlds”—initiated communications with an extraterrestrial brain trust known as “Outer State.” Soon after, he and his wife Jo-Nell founded Mental Investigations of New Dimensions (M.I.N.D.) based out of their bungalow in Hollywood, California.

M.I.N.D.’s main mission was to announce that mass saucer landings were forthcoming and to prepare mankind for this eventual ET-human hookup. The Batemans appeared on radio and TV programs where they predicted specific times and places where the flying saucers would appear. Some of these predictions apparently came true—at least according to signed witness statements produced by the Batemans.

During the mid-1960s—according to Bateman—he became a major source of inspiration for the producers of Star Trek, and in particular Gene L. Coon, who along with other Star Trek writers attended Bateman’s UFO lectures and cribbed ideas he discussed such as wormholes and warp drives (not to mention the “Prime Directive”) and incorporated these concepts into the Star Trek television series. 1 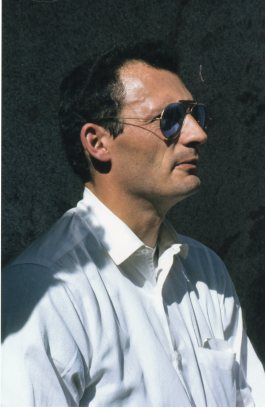 In 1966, a sharp-dressed, handsome young fellow going by the name of Mel Noel made a splash on the east coast saucer circuit when he checked into a luxury hotel with a pair of stunning ladies on either arm and began wining and dining influential magazine editors and news reporters, recruiting them for a prospective flying saucer flight to the stars.

According to the dashing Mr. Noel, the saucer was scheduled to land on the set of the Jackie Gleason television show in Florida, and those interested would have to apply for a space passport. 1 It was around the time of this supposed flying saucer trip that Noel launched the “Ufology Research Institute” that—according to Don Dornan, a reporter for Time Magazine—was a scam to lure investors to pony up for a phony flying saucer trip.

Among other whoppers, Noel claimed the acquaintance of a mysterious “Mr. Genovese” who had been part of a team of scientists that had worked with Guglielmo Marconi developing a “death ray” during World War II. While still in the development stage, Marconi and his group allegedly demonstrated this death ray to Benito Mussolini, and of course Mussolini was smitten with it and wanted it for his very own. When the Italian dictator demanded they fork over the ray gun or else, Marconi refused and soon ended up dead. Afterwards, the rest of the scientists fled Italy with their death ray blueprints and resurfaced five years later at a secret UFO base in Argentina where they were supposedly working with some blond ETs who had agreed to provide a flying saucer ride from Los Angeles to Mexico in ten seconds flat.

It didn’t take Don Dornan long to figure out that Noel was running a saucer scam, and when he threatened to expose him in a Time Magazine article, Noel told investors that Dornan was a dastardly CIA agent who had sabotaged the forthcoming saucer flight, causing its cancellation. 2

Afterwards, Noel faded from the ufological landscape only to re-emerge in a chapter of Timothy Good’s Above Top Secret (1988) where he rolled out many of the same claims that had previously appeared in The Mel Noel Story: The Inside Story of the U.S. Air Force Secrecy on UFOs (1967). As the “story” goes, Noel allegedly served in an Air Force unit during the 1950s involved in top secret UFO photo recon flights, all of which Don Dornan had long ago debunked but nonetheless ufology has a short memory about such things, and so Noel again resuscitated the story for a while in the early ‘90s with an appearance on a Fox Network UFO special. Not long after this appearance, UFO Magazine ran an exposé on Noel, after which he made himself suddenly scarce again.

For more saucy saucer tales just like this, check out “A” is for Adamski: The Golden Age of the UFO Contactees available where ever internet books are sold.

Here’s a UFO-ish Sci-Fi song I recorded several years ago that appeared on my album Psychedelic Secret Agent.

I dreamt I saw a ship

In a sea of stars

A journey far beyond

Sailing through the stars

Beyond the sight of Man

In rocket ships of chrome and steel

With visions in their eyes

Of future planets and bright suns

Shining in the sky

Beyond the stench of planets burned

By Mars, the God of War

Leaving behind the blood and tears

Of all that came before

Aboard a ship of dreams

In a sea of fears

With visions of a new lands

Whispering in their ears

I dreamt I saw a ship

In a sea of space

A journey far beyond

Sailing through the stars

Beyond the sight of Man

A million miles from home