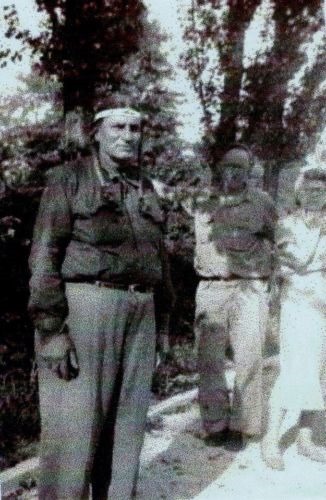 On the evening of July 12th, 1959, Chief Frank Buckshot Standing Horse (1891–1977) of Sulpulpa, Oklahoma, was listening to his transistor radio when it suddenly exploded with a shotgun blast sound followed by the electricity going out at his house. When Chief Frank went to check his fuse box he encountered three average-looking fellows who informed him that they weren’t so average after all, and in fact had travelled all the way from outer space to pick up Chief Frank for a cruise around the cosmos.

The lady was tall with pitch black hair and big beautiful blue eyes. She had no rings on her fingers. She had a well shaped head and well-featured mouth. She was dressed with a blue sort of jacket with an insignia on her right shoulder. I noticed a belt that looked as if it was jeweled, with a long dress.

Mondraoleeka, it should be noted, was 417 years old, although she didn’t look a day over 30. The other ETs that Chief Frank encountered on his trip possessed equally unpronounceable names, and came from a variety of planets that were part of an intergalactic space brother federation like on Star Trek.

With his comely space captain at the helm, Chief Frank was flown around the galaxy to check out several planets, including Venus, Orean, and Clarion, the very same planet that Truman Bethurum had waxed so eloquent about. On the way they listened to the music of Connie Francis over KRMG radio station out of Little Rock, Arkansas, the sound of which was crystal clear even though they were an astounding 100,000 miles from Earth!

At one point, Chief Frank was summoned by the call of nature. After relieving himself in a restroom constructed of shimmering green walls, a flush from the space toilet sent out a wispy blue vapor that filled the air with a wondrous aroma. But that wasn’t all. The Orean spaceship was apparently a top of the line, full-service facility that provided Chief Frank with a soothing bath, a sumptuous meal, and also the opportunity to catch some quality shut eye in a futuristic revolving bed that made Hugh Hefner’s Playboy Mansion set-up look like a cheap army cot.

On subsequent spaceship trips, Chief Frank was treated to a flight to Jupiter on what was called an “Arrow Ship” that was an astounding two and a half miles long!

Apparently spaceships weren’t the only things that grow large in outer space. On one occasion Chief Frank took the speaker’s podium at the Giant Rock Spacecraft Convention to deliver the astounding revelation that “the figs on the Planet Oreon are as big as the watermelons we have on Earth.”