Trevor James Constable was one of George Van Tassel’s earliest visitors at Giant Rock and due to this influence he began channeling Ashtar, a name that turns up time and again in UFO lore. Unlike other Ashtar iterations, the version with whom Constable attained telepathic contact was an Etherian from the fourth dimension, also known as the Realms of Schare.  Apparently the Etherians were a benevolent bunch, but through their teachings Constable also learned of some evil ETs visiting Earth whom he referred to “The Dark Ones.” 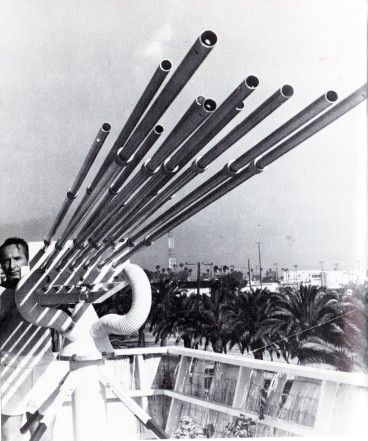 Constable with his trusty Cloudbuster

According to Constable, the Etherians—and the flying saucers they spun in on—exist all around us, and sometimes even pass through us, although in most cases we aren’t able to see them, which explains their tendency to blink in and out of materiality, and why they often take on corporeal form to accommodate what humans expect to see, including nut and bolt craft that are created on a temporary basis to facilitate these human interactions.

In the summer of 1957, Constable began using infra-red film to photograph what he described as “critters”; entities or spaceships (perhaps they were one and the same) that were invisible—or at least could not be viewed by “normal” eyes. 1 What the infrared film allowed Constable to do was peek beyond the curtain, so to speak, and tune into a bandwidth not normally accessed by human perception. The “critters,” or space creatures, in Constable’s photographs appeared as a wide range of strange things, some of which were similar to flying saucer shapes, while other photos revealed amoeba-like entities. Constable used a version Wilhelm Reich’s Cloudbuster to pull these creatures into the atmosphere, or into the infrared spectrum, enabling him to photograph them. Or at least that was the story he was sticking to.

Even within the wooly world of ufology, Constable’s theories bordered on heretical. Because of this—and to shelter his professional career as a military historian—he initially flew under the radar using the pseudonym of “T. James” for his first book Spacemen Friends and Foes (1956), and then later “Trevor James” for They Live In The Sky! (1958). Eventually—as he became more comfortable promoting these ideas—he used his full name Trevor James Constable for his magnum opus, The Cosmic Pulse of Life (1976).

Here’s to a snippet of Constable on the Jeff Rense show from years ago before Rense became a total whacked out nazi!