This installment was co-conceived with my contactee colleague Greg Bishop.

“I am…Howard…Menger. The following statements which I shall make are…true facts.” So begins Menger’s 1957 record Authentic Music From Another Planet  that really didn’t seem all that otherworldly, but just a marginally talented tinkler of the ivories channeling the stars. Along with only two published books (From Outer Space to You and The High Bridge Incident) this was enough to place Menger in the upper echelon of the 1950s UFO contactee movement.

In 1946—at the tender age of 10—Menger met a beautiful blonde in a translucent sky-suit named Marla (sitting on a rock in the forest) who revealed she was 500 years old, although she didn’t look a day over 21. Marla toldyoung Howard she had to get back home to Venus lickety-split, but someday in the future he’d meet another blonde beauty exactly like her, curves and all!

During WWII, Menger served with a tank division in the South Pacific and became proficient with a flamethrower which he used to flush the enemy out of caves and buildings. He related other contacts with spacemen and cosmic beauties throughout his tour of duty, whom he credited with saving his life. They predicted that the Allies would win and also told him that things would get more interesting after the war with a warning: “If you think you’re crazy NOW, Howard, wait until you see some of the other things that are going to happen to you!” 1

Menger was honorably discharged in 1946 and moved to a farm near High Bridge, New Jersey where he ran a sign-painting business and tinkered with homemade inventions. Perhaps because of his electronic and mechanical interests, he became fascinated with flying saucers and in particular (although he denied it later) with George Adamski’s book The Flying Saucers Have Landed, when he first read the title upon its release in 1953.

Feeling a desire to rekindle his cosmic contacts, Menger visited the spot where he’d met his first alien love interest fourteen years before. Not surprisingly, she appeared again and told Menger he had a job to do to help the Space People in their missions on Earth. He had to buy clothes for them (the women giggled and threw their Earth-bras away) and give haircuts to the men, who wore their hair long, like space hippies. These beautiful Venusians started dropping by regularly to Menger’s farm for coffee and friendly chats. Venus soon called upon Howard to serve as their personal barber and cut their long blonde locks so they could easier fit in with Earth society. In return for his hospitality, Menger was rewarded with a series of starship trips to Venus, Mars and the Moon, bringing back photos of the lunar surface taken from a porthole during his saucer ride. As evidence of his otherworldly excursions, Menger showed off a “moon potato” during a guest spot on Long John Nebel’s Party Line, which to all present looked like a common stone.  When asked about the moon potato’s less than earthly appearance, Menger explained it had been “dehydrated.”

On another episode of Party Line, Menger demonstrated a small-scale model of an “energy accumulator”, the design of which was based on space brother specifications. According to Menger, the full-size equivalent of this device served as a flying saucer propulsion system, not to mention a perpetual motion machine.  Perhaps Menger didn’t get the instructions quite right because when he flipped the switch, the small rotating motor fell off the body proper of the contraption. As Menger later explained: “I guess the glue came apart.” 2

Menger held small saucer conventions on his farm, becoming a sort of East Coast version of a poor man’s George Van Tassel. It was at one such saucer soiree that the mysterious Valiant Thor was photographed, the very same Venusian Commander that Dr. Frank Stranges would spend considerable time with at the Pentagon. To date, no one has identified the man with the carefully coiffed pompadour. Attendees were also treated to figures dancing about in the woods on the property at night, although Menger said that the space people were not to be approached because they were shy. 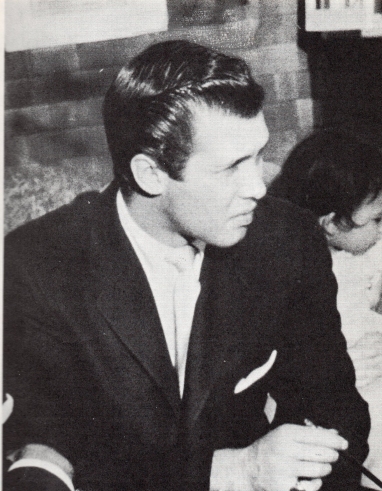 During another event at Menger’s farm, he made the acquaintance of a charming young lady who was a dead ringer for Marla, the blonde Venusian bombshell he’d met as a lad. As it turned out, this young lady—Constance “Connie” Weber—was the reincarnation of Marla (or Marla’s sister, or something like that) replete with gorgeous golden curls. Menger was immediately smitten with Marla’s earthside edition, which didn’t sit well with his wife Rose who promptly filed for divorce.

Some of Menger’s fans later called him on the carpet concerning an episode that occurred at one of his saucer soirees where said fans had assembled in a dimly lit room to meet an actual spacewoman whose features were concealed in the shadows. During this space girl meet-up, a sliver of light landed on her face revealing that it was Connie Weber playing the Space Lady role. 3 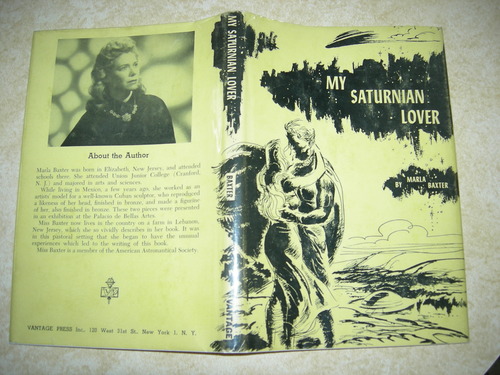 A few years after making this many claims of Venusian visitations, Menger appeared on a Long John Nebel TV broadcast and pretty much backtracked on every claim he’d ever made, claiming that the Government (also known as the “Silence Control Group”) offered him a job to say that he’d made up all his flying saucer stories as well as fabricating a series of space people photos. As for the government job, part of Menger’s duties, or so he claimed, was going around burying boxes. 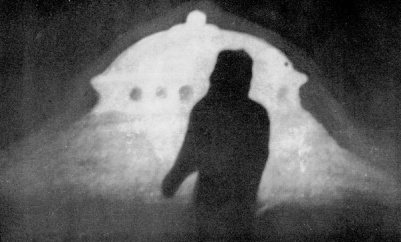 One of Menger’s phony ET photos.

Another of Menger’s phony saucer photos.

In later years, Menger and his wife were occasionally featured at saucer conventions, but his star had faded, and he was looked upon as a relic of an earlier, more naïve era. Jim Moseley, researcher and chronicler of the UFO scene, recalled that Menger appeared at a Florida gathering in the 1990s along with Connie and one of his space-people-inspired contraptions. During a demonstration in a hotel, he plugged his invention into a wall socket and blew all the fuses in the facility. 4 Moseley also reported that Menger was apparently possessed of a furious temper when aroused, which may have been due to his wartime experiences and possible PTSD.

He appears to have come to a sort of peace with his legacy at the time of his death in 2009.

2 thoughts on “Howard Menger and his Venusian Babes”