John Reeves at the site of his spectacular saucer sighting

On March 2, 1965, a 66-year-old retired longshoreman named John Reeves was out snake hunting one afternoon in the scrub flats near his home in Brooksville, Florida, when he came upon a landed saucer that was “bluish green and reddish purple,” resting on four legs and roughly 30’ in diameter. As Reeves cautiously approached the craft, he encountered what appeared to be the pilot, a “robot-like” creature with a domed space helmet. After they stared down each other for a minute or so, the robo-creature pulled out a space camera, held it up to its dome and clicked, followed by a blinding flash. A startled Reeves turned to dash away, and in so doing became tangled up in a bush, stumbled, and fell to the ground, dropping his eye glasses.

The space robot—who it turns out wasn’t such a bad guy after all—bent over and retrieved the glasses, handing them to Reeves. The robot then rode an escalator like staircase back up into his ship and:

“A lot of little blades around the rim of the saucer started to move unison like the slats of a venetian blind. They opened and closed, then the rim started going around counterclockwise. It made a whooshing and rumbling sound as it speeded up its spinning. The staircase pulled up inside…Then the four stilts or legs retracted, and the saucer went straight up with that whooshing sound. I watched, and it was out of sight in less than 10 seconds in the cloudless sky.” 1

After the saucer zoomed away, Reeves examined the landing area and discovered a set of the boot prints, in addition to “two sheets of strong but very thin tissue, unlike anything I’d ever touched before. Both were covered with strange writings or marks that looked like Chinese.”

The following day, Reeves appeared on St. Petersburg radio station WFFB to share his amazing story. Afterwards, he met with Air Force investigators who accompanied him to the saucer site where he directed them to the robot’s boot prints. At this time, Reeves turned over the strange papers to the Air Force officers for analysis. Reeves later claimed that when the papers were returned, the Air Force pulled the old switcheroo, substituting fake papers for the real ones. The Project Blue Book Report stated that:

“Two papers that contained unreadable hieroglyphics were reportedly dropped by an occupant of the spacecraft. An analysis was made of these papers by the Institute of Paper Chemistry in Appleton, Wisconsin. This analysis indicated that the paper is composed of fibers which are common worldwide. The fiber composition corresponds to that used in lens and stencil papers. The hieroglyphics on one of the papers was deciphered by simple substitution and was determined to be the work of an amateur. The deciphered hieroglyphics read as follows: ‘Planet Mars—Are you coming home soon—We miss you very much—Why did you stay away too long?’ Since no other implications were apparent, it was not feasible for the Air Force to expend further time and money in deciphering the second sheet. Based on the above, it is the opinion of the Air Force that an attempt was made to perpetrate a hoax.” 2

On August 6, 1968, Reeves came across another landed saucer, but this time instead of a robot creature, he encountered a crew of beautiful space people, tall and thin with porcelain skin who informed him that they came from planet Moniheya, which we Earthlings know as Venus. The Moniheyans were outfitted in tight-fitting jumpsuits that accentuated their trim, thirty something hot looking bods. (Reeves later learned that his space friends were actually much older than they looked!) On this same occasion, Reeves was treated to a trip to the dark side of the moon, which transpired over the course of six hours. He described the inside of the spaceship as a glass room full of instruments with three-dimensional TV screens that were used for navigational purposes.

While moon-traipsing, Reeves scooped up a handful of lunar dust and poured it into a medicine bottle to smuggle home with him, as well as a large moon rock that he stuffed into his trousers. (“Well, hello there, Earthling. Are you just happy to see me or is that a moon rock in your pocket?”) However, Reeves never showed any of this moon dust to the authorities back on Earth because he was worried it would be confiscated in the same manner as his alien papers.

On another trip, Reeves visited Moniheya, which included viewing such natural wonders as two suns, a pink sea (with Loch Ness type monsters) and blue rain. Reeves spoke of two amazing modes of public transportation he encountered, one of which was moving sidewalks, and the other rockets that cruised around just above the ground, kind of like Volkswagens with wings.

While there, his space friends awarded him the official flag of Moniheya, which like his precious moon dust Reeves decided to keep locked away in a safety deposit box, only showing a few select Earth friends on rare occasions, although he did make a duplicate of the flag which he hung on a wall in his home for visitors to admire.

Reeves with his alien flag in the background. Photo: Douglas Curran

Reeves became known as “the Brooksville spaceman.” He would often set up a stand at the local shopping mall to show off his display of UFO photographs and news clippings. Reeves gained the reputation as a kind hearted fellow, who for many years ran a trailer park where he would feed people down on their luck or let them slide on rent if times were tight.

As a monument to his outer space friends, Reeves erected a full sized model of the Moniheyan spaceship in his front-yard with a plaque that read: “The spaceship that took John Reeves to planet Moniheya, millions and millions of miles from planet Earth, landed here October 5, 1968.” As Douglas Curran wrote in In Advance of the Landing: Folk Concepts of Outer Space:

“Harassed by vandals and county tax collectors, Reeves sold his property in 1980 to the state, which razed his house and UFO monument. Letters of protest poured in from throughout Florida objecting to the ‘desecration of John Reeves’ expression of hope.’ Now eighty-six years old, Reeves lives in a trailer on a side street in Brooksville. His newspaper clippings are kept in an old suitcase that he hauls out for anyone who wants to see. A dog-eared book contains the autographs of people who came to see his UFO monument, among them Jimmy Page of Led Zeppelin, Pat Boone, and Tuesday Weld.” 3 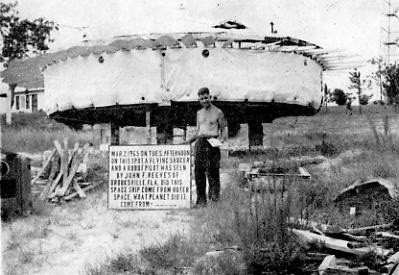 For more amazing saucer stories, pick up a copy of “A” is for Adamski: The Golden Age of the UFO Contactees available now while supplies last!