A gal with classic good looks coupled with a classic martyr syndrome, Gloria Lee was among the more tragic figures to emerge from the Golden Age of the UFO Contactees. A former childhood actress, model, and airline stewardess, Lee began receiving communications in 1953 via an entity from Jupiter going with the initials of J.W.

1959 proved to be a very productive year for both Lee and J.W., which included the publication of Why We Are Here!, a channeled collaboration between the two that read much the same as other cosmic messenger books of the day, filled with a lot of universal wisdom and the Coming-Of-A-New-Age proclamations, although on a sadder note it predicted that England would be swept under the sea. That same year, Lee founded the Cosmon Research Foundation to further promote J.W.’s teachings, an organization that at its height reportedly boasted 2000 members.

Like many contactees of the era, Lee was a speaker at the Giant Rock Interplanetary Spacecraft Convention. During her presentation she shared J.W.’s words of wisdom that “Earthlings have misinterpreted the purpose of their sexual drives” and that marriage was a human conception that didn’t exist on other planets, which allowed for greater sexual freedom throughout the cosmos. It was the dawning of the Age of Aquarius.

In the fall of 1962, Lee approached the United Nations with a plan for world peace that included construction of a space station, but officials rebuffed her. Steadfast in her resolve to bring peace and harmony to the galaxy, Lee took up residence in a Washington, D.C. hotel on September 13th and a short time later began a hunger fast to bring attention to her cause. As Lee informed journalists: “I’ve heard from J.W., and they’re disturbed up there because of fighting in the world and the fact that nuclear bombs might upset their planets. The space people are going to invade the earth and establish a peace program. J.W. has ordered me to go on a fast for peace until he sends a ‘light elevator’ down to take me to Jupiter.”

On December 3nd—sixty-six days into her fast—Lee fell into a coma and died at the tender age of 37, leaving behind a husband and two young children. As tragic as this story may sound, a short time later there was some good news from the spirit realm courtesy of psychic medium Nada-Yolanda (real name Pauline Sharpe): “Hello everybody, this is Gloria. Yes, it’s really me. I’m really finding out how this thing works.” What “this thing” was, we can only surmise—unless, of course, Gloria Lee’s spirit was referring to J.W.’s “light elevator” having transported her to a far better place.

Gloria Lee’s messages from beyond were later compiled into a staggering five-volume set of books published by the Mark-Age Meta Center, Inc., a non-profit corporation based out of Miami, Florida, that was operated by the aforementioned Pauline Sharpe along with her companion and fellow channeler, Mark (aka Charles B. Gentzel.) 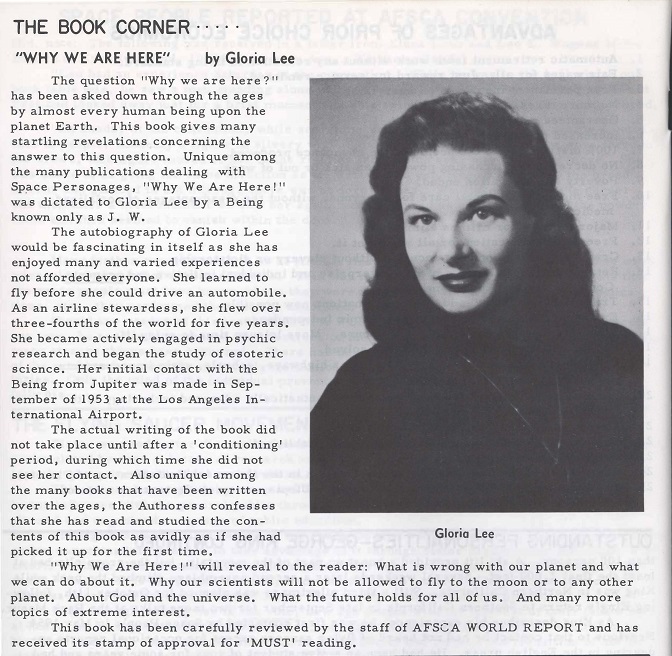 2 thoughts on ““Hello everybody, this is Gloria””