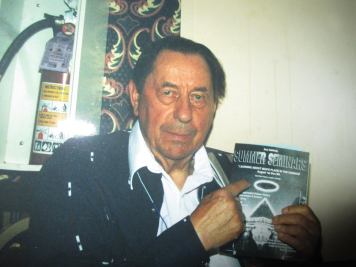 Wayne Sulo Aho claimed otherworldly contacts dating back to his childhood. However, his key encounter with the space brothers allegedly occurred in Washington State in 1948:

“I had my first experience telepathically with the beings who inhabit ‘flying saucers’ while I was making use of a rather noisy D-7 bulldozer used in logging. I had read about an airplane crash with no apparent survivors and noted that some observers saw some UFOs near the scene of the crash three days afterward. While engaged in using the bulldozer, I mused, ‘Who are these strange beings flying in their craft at the scene and why are they here?’ A reply that came was startling: ‘We are caretakers of the souls of the dead!’…”

In 1960, Aho began hosting his “New Dawn” conventions at the base of Mount Rainier (in proximity to Kenneth Arnold’s historic sighting) naming the venue Spacecraft Protective Landing Area for Advancement of Science and Humanities (SPLAASH.) In a letter sent to state and federal authorities—including the President of these United States!—Aho identified SPLAASH as a “Free Landing Zone” (along the same lines of nuclear free zones established by peaceniks across the planet) that would be maintained free of arms and open to all sentient beings, human and otherwise.

Aho claimed he served with Army intelligence during World War II and on the flying saucer lecture circuit referred to himself as Major Aho, a transparent attempt to conflate his name with famed ufologist Major Donald Keyhoe. According to Saucer Smear editor Jim Moseley, others in the UFO field at the time derisively referred to Aho as “Major A-Hole.”

In 1958, Aho formed a partnership with Otis T. Carr, a self-described Nicholas Tesla protégé who claimed to have discovered a hitherto unknown propulsion system, the Utron Electrical Accumulator. Carr announced he was busy at work developing a terrestrial spacecraft—known as “The OTC-X1 Circular Foil Craft”—the design of which would be saucer-shaped and carry a crew consisting of he and his pal Major Aho of the “Air Force Reserves” on its maiden voyage to the moon. 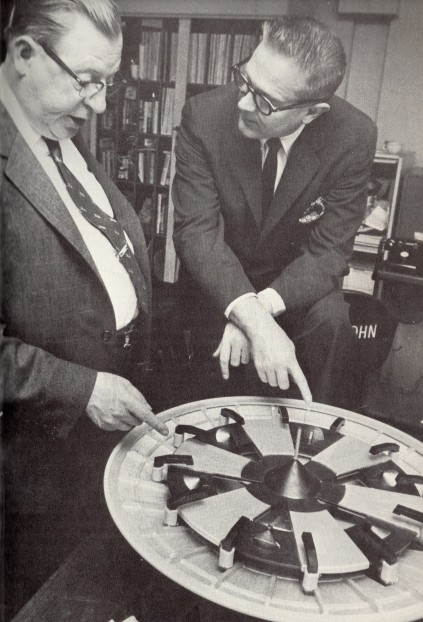 Carr and Aho traveled around the country visiting flying saucer clubs and soliciting donations for the OTC-X1, which they planned to launch into outer space on April 19th, 1959 at the Frontier City amusement park in Oklahoma City. Leading up to the event, Carr appeared on Long John Nebel’s Party Line and invited him to attend the OTC-X1 blast-off. A few days before this historic launch, Long John traveled to Oklahoma City and after a little sleuthing was able to track down the OTC-X1’s secret location at a warehouse on the outskirts of town. Long John repeatedly pounded on the door until at last he was met by a rather hulking figure who informed him that the site was “classified.”  After a spirited back and forth, Long John was able to persuade his way inside the “lab” to view the OTC-X1, which resembled more a pile of unconnected parts than a functioning spaceship. As for the whereabouts of Commander Carr, rumor had it he’d been overtaken by a mysterious throat ailment that rendered him unable to speak.

Come launch day, Carr was a no-show and Aho—left holding the proverbial bag—announced that the OTC-X1’s maiden voyage had been indefinitely postponed due to “technical difficulties” associated with a “mercury leak.” The next day, Long John tracked down Carr at the local Mercy Hospital where he discovered the saucer scientist in his night dress, chatting up an attractive candy-striper about the wonders of the OTC-X1 and his prowess as a spaceship pilot. Long John surprised him with “Hello, Otis” and Carr abruptly fell forward on to his bed in exaggerated gasps of pain. 2 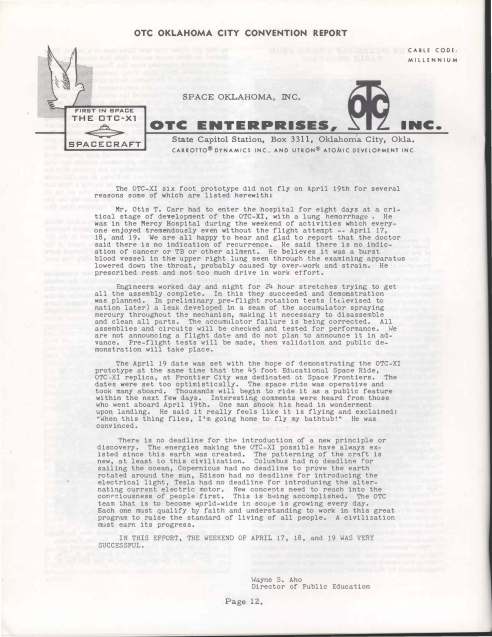 Carr was ultimately convicted of swindling a number of OTC-X1 investors and sentenced to six months in prison. No charges were brought against Aho, who was viewed as an unwitting dupe in the caper. Not long after, Aho went on a solo lecture tour and while in NYC found himself committed to the mental ward at Bellevue Hospital, as documented in “Wayne Aho Falls Victim to the Men in White Coats” an article published in the UFO periodical  S.P.A.C.E.  The author of this article, one Nobert F. Gariety, was a John Birch Society member who claimed that Aho had been railroaded and thrown into the nuthouse by the International Jewish Banking Conspiracy (or something of that sort) due to his involvement in the OTC-X1 debacle.

In recent years, a fellow named Ralph Ring surfaced with claims he was part of the crew that worked with Otis Carr and that he (Ring) piloted an OTC-X1 test flight that traveled ten miles to arrive at its destination instantaneously. According to Ring, Carr was about to introduce the OTC-X1 to the public when the Feds raided his lab and destroyed everything in it to suppress the OTC-X1 because it was powered by “free energy”—and we all know how much the Feds hate free energy. Ring also claims that he helped Jacques Cousteau develop the aqualung, although recent evidence suggests that it was actually a song by Jethro Tull. 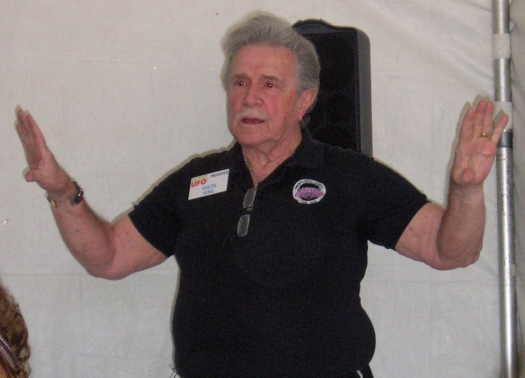 In the fall of 1958, around the same time that Carr and Aho were out on the OTC-X1 fund raising circuit, the Justice Department launched an investigation into Aho for “…IMPERSONATING A MAJOR IN U.S. ARMY INTELLIGENCE…” 3

Apparently, Aho had been going around telling prospective OTC-X1 investors that he was active military, which apparently prompted the FBI’s investigation. A memo to the FBI Washington Field Office stated that Aho “was dismissed from employment at Aberdeen Proving Grounds [in 1953] for poor credit rating and alleged falsification of records; he has been the subject of an impersonation investigation by the Bureau resulting from the cashing of bad checks and also of a Fraud Against the Government investigation based on alleged influence he used in the awarding of Government contracts and also on alleged fraudulent expense vouchers submitted by him while he was employed by the Army. Prosecution in both cases was declined…”

Around the same time of the FBI’s impersonation investigation, Aho sent a somewhat screwy letter to J. Edgar Hoover concerning the prospect that the Russians had secretly landed on the moon. (Aho’s name was redacted from the letter). 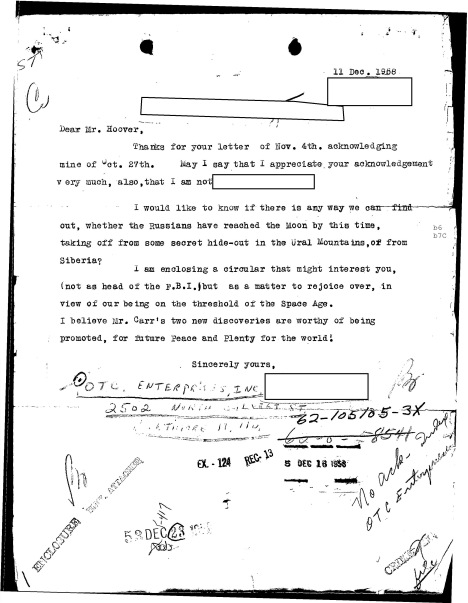 Aho had a long history of sending government officials flying saucer related correspondence. One such example is the letter below that he dashed off to President John F. Kennedy in June of 1961 describing a “divine revelation.” 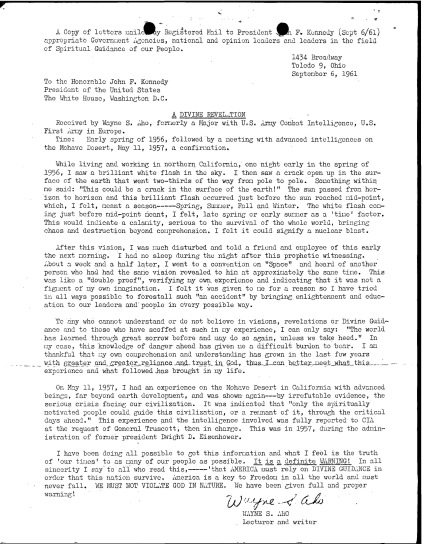 For the complete Aho/Carr FOIA files, you can feast your eyes here courtesy of John Greenewald’s Black Vault.