During the early 1950s, Albert Bender oversaw the International Flying Saucer Bureau (IFSB), a civilian research group based out of Bridgeport, Connecticut, with a worldwide membership of 1500. In conjunction with the IFSB, Bender published Space Review, a newsletter dedicated to the latest saucer happenings.

Calling occupants of interplanetary craft. Calling occupants of interplanetary craft that have been observing our planet EARTH. We of IFSB wish to make contact with you. We are your friends, and would like you to make an appearance here on EARTH. Your presence before us will be welcomed with the utmost friendship. We will do all in our power to promote mutual understanding between your people and the people of EARTH. Please come in peace and help us in our EARTHLY problems. Give us some sign that you have received our message. Be responsible for creating a miracle here on our planet to wake up the ignorant ones to reality. Let us hear from you. We are your friends. (End of message.)

In early September 1953—in what would have been the October issue of Space Review—Bender planned to announce the solution of the flying saucer mystery, but before he could do so was visited by three mysterious Men-in-Black (MIBs) who spooked him into silence. Bender delivered the following portentous message in Space Review for his fellow IFSB members to ponder:

“The mystery of the flying saucers is no longer a mystery. The source is already known, but any information about this is being withheld by orders from a higher source. We would like to print the full story in Space Review, but because of the nature of the information we are sorry that we have been advised in the negative. We advise those engaged in saucer work to please be very cautious.”

Bender ceased publication of Space Review, closed down IFSB, and retired from ufology. He later revealed to close associates that the solution to the “mystery” was that the U.S.A. would soon fall victim to a massive flying saucer attack! However, this attack was not interplanetary, but actually originated from the Earth’s polar regions. Due to this dangerous knowledge, Bender was ostensibly hushed up, one of the very first victims of the legendary “Silencers” who have haunted UFO lore ever since. Others have speculated that Bender cooked up the whole caper as a convenient excuse to exit ufology, as the pressures of overseeing IFSB had become too much, perhaps even leading to a psychological meltdown.

It was Bender’s purported MIB encounter which reignited attention to a phenomenon that’s almost as old as time itself.  These tales of creepy black garbed men go back eons and have long been associated with the sinister doings of witches, warlocks, and other things that go boo in the night.  Upon closer examination, it appears that Bender’s MIB experiences may have had more to do with his long standing interest in the occult rather than some sort of secret government backlash in response to flying saucer investigations. 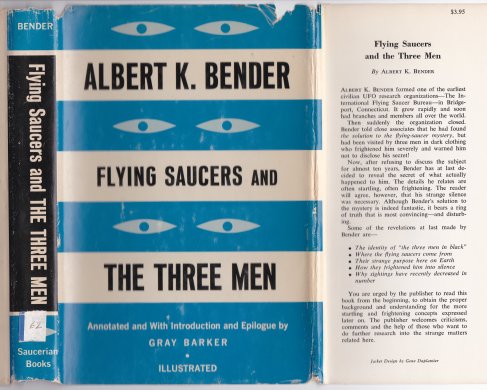 Due to his peculiar interests, Bender transformed an upstairs room in his stepfather’s house into what he called his “chamber of horrors.” He painted the walls with depictions of grotesque scenes from the works of Shelley, Stoker and Poe and adorned it with “macabre items such as artificial human skulls, shrunken heads, bats, spiders, snakes.” At the same time, Bender was “reading books on black magic, occult subjects, and other similar works…[he] even tried to hold some séances.” In recent years, UFO researcher and occult historian Allen Greenfield discovered—among some old photos of Bender’s “chamber of horrors”—that in one corner of the room an altar had been erected, ostensibly used for ritual magic. From this, it could be conjectured, Bender’s occult dabblings might have awakened some ancient demons that paid him a visit.

Al Bender in his purported “chamber of horrors”

In Flying Saucers and the Three Men (1963), Bender recounted his visit by the three mysterious men, whom he says whisked him away to planet Kazik. It was there that he was taken to a room where three exceptionally attractive women “dressed in tight white uniforms” removed his clothing and, as Bender recalled:

“My body suddenly became rigid and I could not move a single muscle…I became frightened…my fright changed to embarrassment as I felt their hands begin to remove my clothing. I could do nothing to stop them, for I was stiff as a board. With great efficacy they removed every piece of my clothing, leaving me naked as the day I was born…[they produced] a vile containing a liquid which they poured over my body. Then the three messaged the liquid into my skin. As they did so my body became warm as if heat were being applied. They messaged every part of my body without exception…”

Bender emerged briefly from his self-imposed ufological exile with an ‘appearance’ at what was the largest and best attended UFO Convention in U.S. history in New York City on June 24th, 1967, called, appropriately enough, “The Big Flying Saucer Show.” However—due to unspecified fears for his safety—Bender sent a tape recording that was played to a packed house of wide-eyed attendees. In it, he reminisced about the history of the IFSB, his chilling MIB encounters, in addition to a number of recent contactee-type experiences which were going to be part of a new book Gray Barker planned to publish. Barker later described Bender’s forthcoming book as “not good enough to do anything with.”

2 thoughts on “Albert Bender and the Girls from Kazik”