Woody Derenberger’s life took a turn for the weird in the early morning hours of November 2nd, 1966, while driving Interstate 77 near Parkersburg, West Virginia when a spaceship resembling a huge “kerosene lamp” appeared, causing Woody to pull off on the shoulder of the road, after which a man in shiny trousers exited the craft, walk up to him and requested that Woody roll down the window of his Ford Econovan. Mr. Shiny Pants telepathically assured Woody that he meant no harm—only much happiness—and communicated his name as Indrid Cold. Woody later reported that Indrid—who referred to himself as a “searcher”—possessed a nice tan and looked no different than the average person you’d meet strolling down the street. After a few minutes of conversation, Indrid said he’d be seeing him again and then hopped aboard his spacecraft and away he went. 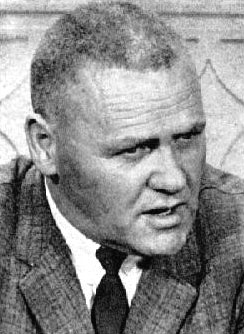 The local Parkersburg media quickly caught wind of Woody’s story and he consented to an interview the next day at television station WTAP. Other media outlets and local law enforcement met with Woody at this time—including a U.S. Air Force official—and the general consensus was that Woody seemed to be on the up and up.

Not long after Woody’s sighting (of the man in the kerosene lamp craft with the shiny blue pants) people in the same neck of those West Virginia woods reported the appearance of an apparent bird-like creature with blood red eyes. This, of course, was an entity later to become known as the Mothman who many suspect was somehow related to a number of other UFO sightings that occurred in West Virginia during this period.

On November 4th, Woody was driving back from Ohio when he started receiving telepathic transmissions from Mr. Cold calling in from planet Lanulos. Cold cautioned Woody to slow his roll and drive carefully because he didn’t want to be responsible for Woody wrapping his Econovan around a telephone pole while receiving these telepathic transmissions. Among other words of wisdom Mr. Cold shared was that time on Lanulos was unlike time on Earth, and that Lanulosians strutted their stuff in the buff, on a sort of outer space nudist colony.

Eventually, Indrid—along with his spaceship’s navigator, Carl Ardo—visited Woody and his family at Derenberger’s home, a story chronicled in Visitors From Lanulos (1971).

For more amazing stories like the one you’ve just beheld, go pick up yourself a copy of A is for Adamski: The Golden Age of the UFO Contactees while supplies last!

2 thoughts on “Woody Derenberger and the Visitors from Lanulos”